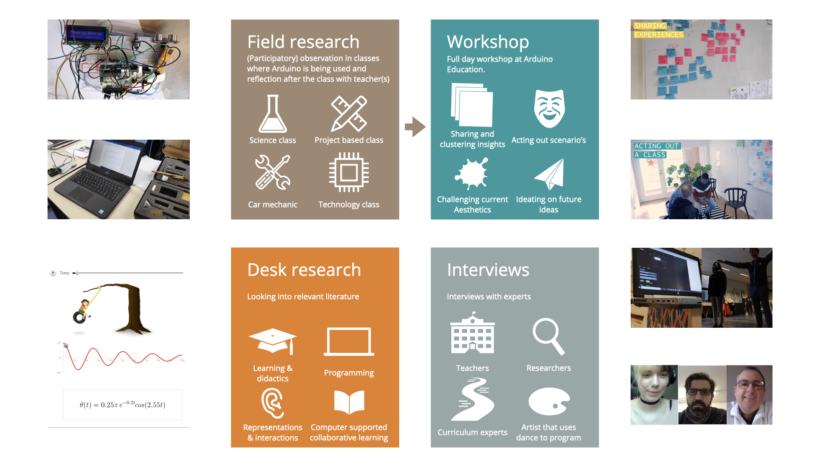 During the last weeks, I’ve been talking to experts, teachers, students and observing different classrooms that use Arduino as part of their curriculum. I’ve been visiting an artist that uses dance to create websites. Besides that, I’ve been reading about programming curriculums, education models and different methods of understanding

By visiting schools, I became much more aware of the context in which the learning happens; the daily encounters that teachers deal with; the classroom management; the group dynamics of students and the social dynamic of high-schools and classrooms. The goal is to get to understand the context as a source of inspiration for the thesis project, it’s not full-fetched quantitative research, but more like finding interesting threads as a starting point for designing.

Interesting was how the teamwork was happening. Students were put into pairs for the ‘basic course’ or groups of four for the more project-based course.

“They make groups of 2 students; because otherwise, it not manageable”

With the more project-based course (with four students on each team) it was interesting to see how the student(s) working on the Arduino part were disconnected from the materiality of the group work done by the other students in the group (that we’re painting; drilling; sawing and creatively responding to each other). This reinforces the stereotypical ‘programmer’ as a lone person; focused and disengaged looking at a screen.

“I try to make them switch roles as much as possible. In every exercise, they should switch roles. In reality, this doesn’t really happen, since not everyone is at the same exercise, I can’t do this with a call for attention.”

In the basic course that was done in pairs, the goal was to let them switch roles, but from the observations, the static setup of a laptop made one person mainly responsible for one part of it; there were collaborative efforts, but the seated position in combination with the static laptop reinforced this role division. One person is programming, the other person is more engaged with the hardware; if engaged at all.

This was also visible in the observations; when time pressure was perceived the focus moved from learning to producing; which sometimes even changes the role of the teacher in the classroom.

It was interesting how the forced teamwork in the body HTML experience of Alvin Arthur created a different experience; it adds a bit of friction (you need to agree and work together to move on) but perhaps this is the right type of friction, to practice teamwork? Should there be a difference between sketching (where the goal is not to define but to explore) and writing (where the goal is to describe a common goal)?

According to the book “Make it stick” there should be friction in the learning process since research shows that learning sticks better when there is an effort put into the learning:

“Effortful retrieval makes for stronger learning and retention. We’re easily seduced into believing that learning is better when it’s easier, but the research shows the opposite: when the mind has to work, learning sticks better.”

Make It Stick: The Science of Successful Learning

So not everything should be effortless, but the focus should be on the parts that we want students to learn and perhaps avoid focusing on the nagging of syntax and serial port troubleshooting especially in the beginning.

One of the main motivations for using Arduino as a tool to teach skills like computational thinking and electronics is its capability to inspire students.

“If they later in the curriculum of O&O do a project; they know that Arduino is a possibility and what it can help with.” —

This quote represents all the teachers that I spoke to; the goal of using Arduino instead of micro bit or other systems like Mindstorms is in the fact that the ceiling is high; and if students want to get into it, they can do a lot with it. This is mostly because the community that shows examples of use; gives tutorials on how to do a specific thing and the libraries or explanations on how to use external hardware.

The more electrical part of Arduino is mostly seen as an advantage; it doesn’t “hide components away in boxes”. Although one teacher told me that she would like to have more forgiving I/O ports; where power management is less of an issue.

“I’m a great supporter of doing experiments, but it’s a balance between giving them the basics and letting them experiment, they don’t think logical and constructive; this is what you realize when you teach them to let them build the mechanical (da Vinci) machines. They think magical; they couple the image to the function; but don’t really understand how.”

The teacher is always balancing out the support (how much do I help), the didactics (how much do I let them struggle; explore the issue themselves), the technology (what is going on; why is it not working), group work (how can I make others be involved) and time (how much time is left; in this class). This balance is shifting when teachers and students feel time pressure; when teachers and or students don’t know what is wrong and the ambitions or goals of the student (teams) don’t align with their skills or attitude.

“It’s a very stressful and terrifying experience when as a teacher something doesn’t work, and you don’t know why. You only have so much time; every time I teach an Arduino workshop, I’ve been soaked in sweat because of this… At some point, you have to give up and leave some people behind, so it’s a lose-lose situation.”

The students had a short introduction (2 lessons) where the teacher was assisted with 4 student’s mechatronics from the local university of applied science (in total a student to teacher ratio of 6 to 1. “Without this help, these lessons wouldn’t work.” The teacher explained that there are just not enough hands to help (with the practical issues that occur).

“Teachers are scared by the cpp code, since there is a lot of syntax errors; especially on the levels of basis and kader (Dutch lower-level education).